This true story begins when Mohammed Khoury a black African Muslim from Gambia arrived in Britain. Mohammed (24) was the son of an imam from a wealthy family. He enrolled in a college for a history course, he had come to Britain to study.

First day in the college…
Mohammed entered the lecture room and sat down alone on one of the benches.
He was the only muslim in the class and he also looked different from the rest of the students, he was tall and looked strong. It was the first day and so most of the students did not know one another.
Mohammed saw some white girls in the class they were dressed like sluts. He grew up seeing women in his country dressed decently according to islam, not only women but in his country the men also dressed decently without any kind of fashion and showoff.
Now he was seeing girls who looked like they are here for modelling and displaying their body rather than studying.

Suddenly one hot white chick entered the lecture room, some white boys started looking at her. She looked around and most of the benches were filled.
Mohammed was sitting alone, those were typical class room benches which could easily accommodate three people.
This white girl saw the empty space and sat next to Mohammed.
Mohammed graduated from an islamic college in Gambia. In that college girls and boys used to sit separately.
Mohammed was not shy but he thought of her as another typical white slut.
This girl was open minded atheist, secular, humanist, liberal and what not.

She tries to talk with Mohammed- Hi, I am Katelyn, put her hand forward but mohammed did not shake her hand it was haram for him.
Katelyn- May I know your name ?
He replied- Mohammed Khoury.
After an hour first lecture ended, Mohammed was quiet all this time.
Katelyn- Where you from ?
Mohammed didn’t reply.
Katelyn- Are you always so quiet ?
Mohammed- I dont need to reply to you. Who are you to ask me ?
Katelyn- We are class mates and we could be friends.
Mohammed- You are a woman, you cannot be my friend. You can either be my wife or my slave.
Katelyn- wtf are you fucked up in the head.
Mohammed- Judging from your actions it seems you would make a better slave than a wife, I am from Gambia we have our own ways, dont think about enforcing your views or culture on me. You seem very eager and hungry, looks like you haven’t got a real man till now, not a surprise since all I see here is pussy boys filled with stupid materialistic shit.
Katelyn- This is really wierd.
Mohammed- Then keep your mouth shut.

Katelyn thought that a sight of a pretty girl would soften him like it does to most men and that he would love to talk with her but it was quite the opposite. This dominant muslim Mohammed Khoury was not going to bow down to her beauty or treat her like some angel. A true muslim does not bow down or submit to the creations (humans or other things of the materialistic world) but only in front of the creator (allah).

The first day ended with two lectures.
Katelyn was never treated like this before. Every guy she met in her 22 years of life treated her like an angel more or less because she was very pretty. She though Mohammed would get attracted to her just like other guys but it turned out to be quite different from what she thought.
The next day she was on a mission. Again she sat next to Mohammed.
Katelyn- I am very sorry I should not have asked you so many questions.
Staunch dominant black muslim Mohammed smiled, he was pleased to hear her apologize and soften her tone.
Mohammed- Good start but you have yet to go a long way.
Katelyn- What can I do for you, do you want me to become your slave.
Mohammed- That only time will decide what you are worthy for.

After an hour as usual the first lecture ended. In between the lectures there was a break of 10 minutes. Katelyn now came closer to Mohammed the side portion of thigh touched against Mohammed’s thigh. She wore shorts and Mohammed was dressed in a simple pant and a loose shirt.
Mohammed- These things come easily to white girls like you, another reason why you would make a better slave.
Katelyn didn’t try to reply back or argue with Mohammed. Then she saw Mohammed’s crotch bulge and it was big. Today she was acting in a submissive manner, Mohammed was getting impressed seeing the change his dick got hard in his pants.
Now Katelyn deliberately dropped her pen, she stretched herself down with her head rested on Mohammed’s thighs. She acted as if she is struggling to reach it she moved her head forward towards his crotch bulge and she felt mohammad’s dick on her head. After that she picked up the pen.
Mohammad- You are a big whore.
Katelyn- Yes I am, you are right. I dont know whether I am worthy but may I have your number please.
Seeing the change in her, Mohammed gave her his number.

She sent some of her pics in bikini to Mohammed. Mohammed didn’t like her actions but he wouldn’t mind pumping her pussy after making her a slave. He was now experiencing himself that that these kind of things are common with these white girls. That night Katelyn couldn’t help, she fantasized about Mohammed’s african muslim cock and fingered her pussy while biting her lips.

The next day after the college Katelyn requested him to take her to his place, where he lives. Mohammed took her to a small house which he had purchased on rent. As soon as they entered the house Katelyn  kissed Mohammed.
Mohammed grabbed her blonde hairs and said- I have a wife back in Gambia, I can take a second wife but you seem more fit to be a slave.

Katelyn- Why does it necessarily have to be either a slave or a wife, cant it be neither. Neither a slave or a wife we could just have fun, just friends with benefits.
Mohammed- We dont follow your whore culture, there are other men who would be willing to be friends with benefits and I have no doubt you have got fucked by quite a few but still you want me, seems like you ain’t getting real men, just pussy boys who cant satisfy you.

As a resolute muslim man I can either take you as a slave or a wife there is no middle ground. To become a wife you have to live like a simple muslimah which I am sure you cannot so there is only one option left. To become a slave you have to submit in front of me. I would fuck you as my ‘right hand possession’.

After sucking his dick Katelyn spreads her legs wide open for her master. Seeing this Mohammed said- Not like this, stand up and kneel like a bitch with your ass facing my dick. 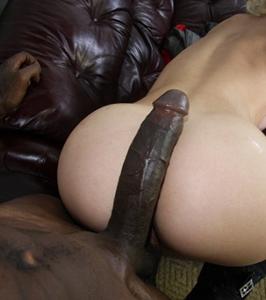 Mohammed put his dick on her ass and said thats how we fuck a slave. He inserted his dick which was covered with cum and saliva inside her cunt from behind. Katelyn shivered for a moment as his big muslim cock entered her pussy.
Mohammed started thrusting his big dick in and out of her hole. Nothing except the moans came out of Katelyn’s mouth.
Mohammed Khoury the son of islam fucked white infidel girl Katelyn from behind like a bitch who had completely submitted herself to him.
Katelyn was getting mad feeling every inch of his extra hard black muslim cock slipping and rubbing inside her vagina. That day she reached an orgasm, her white pussy got a taste of real manhood. For two years Katelyn served her muslim master and she served well. Verily the dominant and steadfast Mohammed didn’t like the white western culture and their women acting like bitches but he loved putting these bitches in their place i.e; below his dick. Katelyn was not the only white girl he fucked, she was just his fuck slave, he was not bound by any obligation. He fucked many more white girls and made them submit as his ‘right hand possession’. But Katelyn was by far his favorite fuck slut.
Sometimes he used to have some kind of quarrel with the white boys, sometimes sudden outburst about white world being hollow and stupid on such days he used to fuck Katelyn to release his frustration and it was especially on such occasions Katelyn loved it the most, she loved the wrath of that big african muslim cock inside her white infidel pussy.

After two years Mohammed went back home to Gambia. Katelyn used to feel alone and lonely but soon she found herself another dominant african muslim whom she was ready to serve.