So the Calais migrant camp is demolished and the migrants/refugees are being shifted elsewhere in Europe. The Calais migrant camp became famous and controversial, some media outlets even used the term notorious for it. It was big and getting out of control with more and more refugees pouring in. Many theories floating around, politics aside the only thing which is of concern is “white woman’s pussy and muslim cock”. Muslim cock ain’t going anywhere and white pussy will follow it where ever it goes. White women were going to this migrant camp to have sex with migrants/refugees who are predominantly Muslims from Arab countries, Africa and even from Bangladesh and Pakistan.

So would anything change after the demolition ? No, white women will still continue to suck and ride muslim dick, it is what truly satisfies their immense sexual urge.
White women have been regularly going to this camp to get a taste of real manhood since white man’s dick ain’t no good, white women do not get aroused around pussy white men anymore they need manly muslim men from male dominated foreign lands of masculinity and manhood.

Where there is smoke there is fire. So many British women were going to Calais camp to get something which white men cannot give them.

A Pakistani migrant Jibran and white woman named Dinah in the Calais jungle camp. No white man could make her so happy, see the happiness on her face, seeing that why would other white gals stay back.

Love and sex in the jungle, another white woman falls for muslim in Calais refugee camp.
Sarah Gayton a British blonde left her job, from the U.K she went to France to work as a volunteer for free in Calais jungle refugee camp, and it shouldn’t surprise you that she found herself a muslim dong.
Obviously there were many more love and sex stories that happened in Calais jungle camp between white women and muslim men that didn’t make it to the media. These two serve as good examples and it is not just limited to Calais there are hundreds of refugee/migrant camps out there in Europe with hundreds of stories. Many white boys out there want to know every one of those stories as it serves as a good fap material for them.

Sisterhood among white women seems to be strong. White women are on the front line, they are in the vanguard grabbing muslim dicks, sukin and ridin it.

Earlier they were saying white women are stupid now they realize it was a calculated plan by whyte women to get superior seed. Just like you can’t keep a fish away from water similarly you cannot keep a white women away from superior muslim manhood. 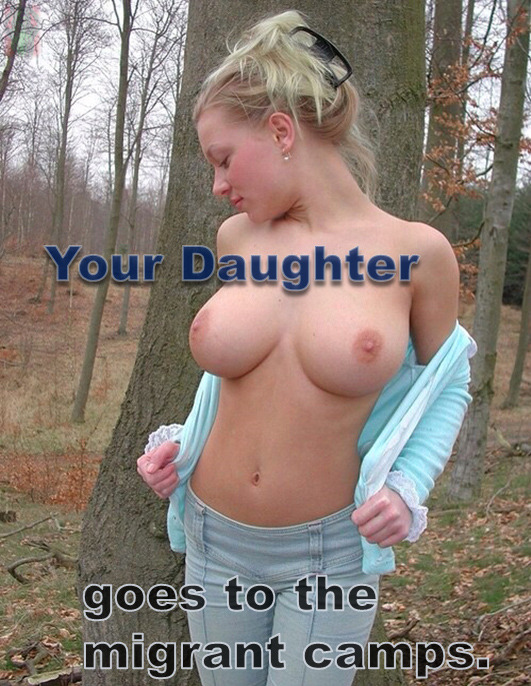